This page explains, from the beginning, each step that was taken to identify the users of most interest for this analysis.

Of these 22M tweets, 260,859 are Geo-tagged. The geographical distribution of these is quite impressive, in just the first 5 days (until October 30), it looks like this: 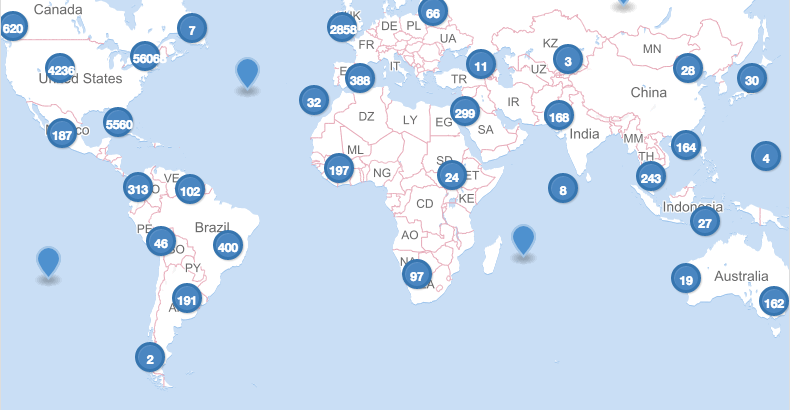 This image shows tweets about the event originating from nearly every continent. This particular graphic shows ~70k tweets from ~45k users. This highlights the need for a geographic bounding box to better focus our analysis on geographically vulnerable users.

For further analysis, the following bounding box was quickly drawn up between NCAR and Project EPIC to outline the potentially most-affected areas.

After the event, Project EPIC went back and collected the contextual streams for 23,528 users who had at least 1 geo-tagged tweet in the above bounding box. These streams are composed of all of a user’s tweets, not just those referencing the storm.

Using the contextual streams, The following method was used to determine a potential ‘home’ location for a Twitterer.

Taking all of the geographical Twitter data we have for that user, we perform a geosptial clustering operation on it. The algorithm of choice here is DBScan. The advantages of DBScan is the ability to have a null collection as well as not needing to predetermine the amount of clusters.

Example of 6 Distinct Clusters: With user iKhoiBoi as a sample, we examine the contextual stream to develop a history of the user’s locations.

We also know from this clustering that the user is “classifiable” because they do have distinct clusters. Furthermore, the percentage of tweets which fall into the miscellaneous clusters is very low, only 4%, so we can be relatively sure that these clusters are significant to their movement + Twitter use patterns, in a recurring manner.

With separate clusters determined based on the relative locations of Twitter activity, we need to attempt to determine a Home or Base cluster. By looking at the recurring time pattern of when a user tweets from these clusters, we can determine some level of regularity.

With the sample above, these scores are derived as follows. For any given cluster,

This table shows the breakdown for all of this user’s tweets. We can see that cluster 1 is weighted very heavily in the total score, but if we look at just this metric calculated for tweets occuring before Landfall*, cluster 0 has the most regular tweet activity in this time period. Therefore, this user’s Home Location is believed to be cluster 0. Empirical analysis of the above map shows this to be a very reasonable estimation, located at the Dolphin Cove Condominiums.

*Currently this is using tweets from October 20, 2012 onwards; very good results have come from this; but it is possible to expand and re-run for more information.

Based on the Home Location as calculated above, we can identify the following list of users who are at most risk, based on further geographic filters.

The next image shows the home location of users intersected with the above bounding box. 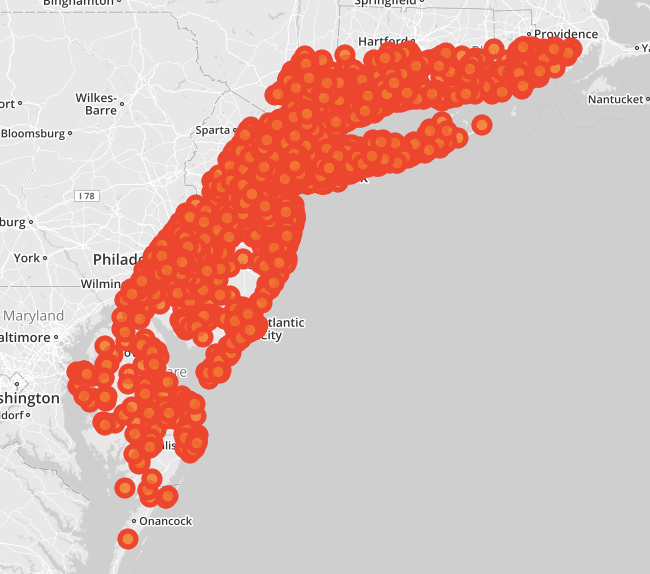 It’s clear that we have a lot of data and this particular bounding box is not very useful in this manner because it just shows the outline of the box itself; which is impressive in the distribution of users in general. Unfortunately, this distribution is very unequal:

As such, more geographic filtering is necessary; furthermore it was determined that there should be no single approach to identifying these users. To accurately assess their movement patterns, it is imperative to take into account the geographic differences in their locations.

As a first pass, we identified users along the coast, this is the 800 number we keep referring to. Users which we have qualitatively coded are in blue:

The users that we’ve coded so far are here:

With a rough metric of evacuation as someone who left and came back.

In parallel to this work, and is now further along, the users identified above were qualitatively coded by their contextual tweet streams. As such, we know with some certainty which users evacuated by the content of their tweets.

We have only looked at a very small geogrpahic subset of our data. Acknowledging that this is certainly not a random sample and using what we’ve learned to adapt to NYC evacuation zones is a logical step.